Sadly, after about 8 months of very occasional use, my iShower speaker will no longer power on. I don’t know of a better water-resistant speaker to suggest, but I can no longer recommend the iShower. (The unmodified text of my original review follows.)

Take Your Music Anywhere With iShower

Do you take showers? Do you enjoy listening to music? Have you ever wanted to combine the two? If so, the iShower by iDevices just might be the thing for you! iShower is a water-resistant wireless speaker which works with any Bluetooth-enabled portable device such as a smart phone, mp3 player, or tablet. Here’s a summary of the iShower speaker’s features: The iShower from iDevices is a water-resistant wireless speaker which works with any Bluetooth-enabled portable. Photo © Thomas PR. Showers are More Fun with Music

I have been listening to music in the shower for quite a while, and it does make shower time a lot more enjoyable. Before owning the iShower, I’d always use my Squeezebox Radio by putting it on a shelf near my shower and turning up the sound loud enough to hear over the running water in the shower. That meant it was loud enough for other members of the house to hear also–and they didn’t always appreciate it! It was also inconvenient if I wanted to access the music controls because although the Radio was within arm’s reach of the shower, I would have to dry my hand & arm and reach outside of the shower curtain to access the controls.

The iShower speaker is water resistant and is designed to go right into the shower with you. That means you don’t have to blast the music so loud that the entire household hears it. It also has controls built right onto the speaker, so you can leave your device safely away from the water and still have access to volume and transport controls.

Perhaps you are one of those people who thinks showers should only take five minutes and it’s hardly worth the bother of having music. Well, not all of us are able to pull that off! Even a rushed shower for me takes a minimum of 15 minutes–and, of course, I like to keep the tunes rolling while I perform my post-shower routine. But even if you are one of those five-minute showerers, the iShower speaker is great for all kinds of damp environments–at the beach, poolside, in the hot tub, or at the gym. And it makes a nice compact travel speaker, too.

I can’t say the iShower speaker has outstanding sound. It’s mono, for one thing. But for its intended purpose, it sounds good enough to me. The sound is better than the small Satechi portable bluetooth speaker I own, but not as good as the Squeezebox Radio. That said, I am by no means an audiophile, and impeccable sound is not something I concern myself with. The first time I used it in the shower, I felt the sound was sometimes harsh or grating. I thought this was due to the sound bouncing off the tile walls, and the next time I used it in the shower, I was able to dampen the harshness by hanging a washcloth behind the iShower (the speaker is in the back of it).

iShower’s audio does become distorted at higher volumes, but I have found this to be the case with most small, portable speakers. iShower advises adjusting the equalizer on your device if you experience distortion at higher volumes.

The speaker itself is rear-facing, and the controls are on the front. This makes sense for use in the shower where the sound is going to bounce back to you, but in other locations, such as at the beach, pool or spa, it’s less than ideal. When I used the iShower at the pool, I had to turn it around so the speaker was facing toward me, which improved the sound but made the controls less accessible.

For poolside use, I found the iShower a little too low in volume when competing with splashing and pool pump noise. I plan to stick with my Squeezebox Radio for poolside tunes, which I can also control with wet hands using my iPhone in a LifeProof case.

The iShower mount for hanging the speaker in the shower. Photo © iDevices, LLC.

I did not use the included wall mount for the iShower. Instead, I simply placed the hinged kickstand over the towel bar in my shower, where it stayed in place by leverage. The hinged stand also allows you to hang the iShower over your shower-head plumbing, as long as you don’t have an oversized shower-head.

The wall mount holds the iShower about 2 inches away from the wall and uses pegs to hang the speaker, so you can easily take it off the mount when you want to take it with you. The mount has several notches and grooves which baffled me at first. But when I re-read the press materials, I realized they must be for the optional shower mirror accessory, which has yet to materialize on the iShower web site.

I have to say, I think this thing is rather ugly and outdated-looking. I wonder if the designers were trying to make it look like a giant bar of soap? Though the hinged stand has a bit of grippy rubber on the bottom edge, the speaker itself does not, so when placed on a slick surface (such as granite counter top or bathtub edge), the speaker would not stay standing up unless propped on its side. Aside from that, it seems to be fairly durable and well-built.

The iShower controls are straightforward, despite being a bit oddly positioned. It’s worth noting that the clock display shown in most photos requires a button press. The display is usually blank, but in addition to being a clock it also provides feedback during device pairing. Unfortunately, iShower does not have a 30-second rewind button or seek controls, so if you often listen to podcasts or audiobooks, this might be a deal-breaker for you.

As a travel speaker, I like the iShower speaker a bit better than the Satechi bluetooth speaker I already had, although the iShower is larger, because it’s louder and can go into more environments. Bummer: it also requires me to carry spare batteries since it is, unfortunately, not rechargeable. 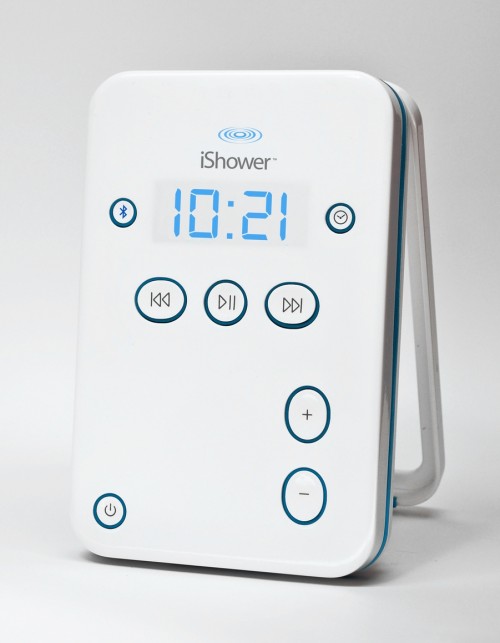 I have gone through one set of my batteries so far in my usage, and though I didn’t track the time I’d guess the 15-hour playing time estimate is pretty accurate. I chose to replace the batteries with Eneloop rechargeable batteries. On the subject of batteries, you will need a coin or similar object to open the battery compartment door; the cover is secured tightly due to the water resistant design, and they chose to use a coin-slotted screw for that.

It’s a shame the iShower isn’t rechargeable. I’d even prefer this at the cost of reduced usage time between charges. I think it could have been done with a sealed port cover, which would be easier to access than the battery door in the back.

I used the iShower with an iPod touch, an iPad, and an iPhone (it works with Android devices, too). Pairing was easy enough. I did have to look at the instructions when pairing initially, and again later when I wanted to remove a pairing and add a new one. Being able to pair iShower with up to five devices makes the pairing a bit more complicated than you might have experienced with other devices, but is a great feature which adds value to the product for multi-gadget households. To sum up… pairing was simple, the controls work well, the sound is good enough, and I never experienced interference or drop-outs like I have sometimes with other Bluetooth devices. I’d be more impressed if it was rechargeable, had skip-back and/or seeking controls, and a more modern design. I’d also like to see it priced about 25% lower. I probably would not have sought out this device for myself, but I like it and would recommend it, especially if you have a lifestyle that revolves around water.

You can buy the iShower speaker directly from iDevices for US$99.99.