Earlier this year, I was in the market for a new portable Bluetooth speaker. My iShower up and died, and my Satechi speaker, though I still like it, began to sound distorted–and it has never had enough volume to use outdoors. The Oontz Angle from Cambridge Soundworks went on sale just in time for my birthday, so I jumped on it.

I preferred the look of the Oontz Angle over the regular Oontz speaker. The angled shape with the patterned speaker grill was more attractive to me. However, the Angle speaker does not have transport controls, only volume up and down.

The first time I really put the Oontz Angle though its paces, I was vacationing at a rental property. I experienced frequent audio dropouts during this time where the music would go silent for a second or two approximately every 3-5 minutes. It was very annoying. This vacation property had two WiFi routers and I assumed that interference from them was the cause. However, when I tried the speaker in other environments, it exhibited the same problem. The problem did go away for a long period when WiFi was disabled on the source device, but this was not an acceptable workaround for me.

I contacted Cambridge Audio and they assured me this was not typical performance of the speaker (although I found user reviews from others who’d experienced this problem) and suggested I arrange an exchange through Amazon.com. I did so, and much to my surprise, the second speaker I received exhibited the identical problem. This time I thought to test the speaker with other devices. I tried my Google Nexus 7 and did not experience the audio dropouts. Neither did they occur with my husband’s iPhone. But with both my iPhone and iPad, I experienced dropouts. If I removed all apps from background apps, I could go for long periods without a dropout, but the problem always came back eventually.

I contacted Cambridge Audio again and the only suggestion offered was that the speaker needed to be charged for a full eight hours the first time it is used, regardless of what the charging indicator light shows. Well, that critical bit of info is not mentioned anywhere in the user manual, and by this point it was too late for that.

I also realized that I was missing forward/back and pause/play transport controls on the speaker itself. The regular Oontz Speaker has this, but the Oontz Angle does not. Although it cost $20 more at the time, I decided to exchange the Oontz Angle for the regular Oontz speaker and rely on Amazon’s exceptional return policy if it exhibited the same problem.

This time I was careful to allow the speaker to charge overnight before first use, even though this recommendation is not in the Oontz manual either. I have now had the Oontz Speaker for a little more than a month and have not experienced frequent dropouts with it. That is not to say I never have dropouts–it does still occur near the end of a charge cycle, but not nearly as frequently as I was experiencing with the Oontz Angle. Following a full charge, I am able to run it for many hours without dropouts.

Although I wish it had been $20 cheaper (and later, it was), the Oontz is a pretty good portable Bluetooth speaker. The volume is good for outdoor and even pool-side use, and the sound is pretty good to my non-audiophile ears. It doesn’t sound as good as my Logitech Squeezebox Radio, but it’s better than most similarly-sized portable speakers I have heard in this price range. The sound does vary in quality depending on the type of surface on which the speaker is placed. For instance, I can hear a difference in the quality of the sound when the speaker is placed on granite vs. wood, and whether or not there is something behind it. Overall, though, the sound quality and volume is acceptable for me.

The Oontz speaker comes in a variety of attractive colors.

The Oontz comes with a mini-USB cable for charging to a USB port (no AC adapter), an aux-in audio cable, and a handy velvet pouch for travel. Oontz comes in a number of stylish color options, including my favorite color, red. Unfortunately, it has an ugly, cartoonish-looking logo plastered across the top of the unit which really detracts from the aesthetics.

The buttons are on the side in a circular configuration for controlling source, volume, forward, and back. The center button does play/pause and answer for speakerphone. This button arrangement is not ideal because it is not obvious which button is volume up vs. down and skip forward vs. back. The button icons are also hard to read so it’s a bit frustrating until you memorize the layout. I wish the buttons were placed in a line along the top of the speaker in place of the ugly, giant logo. At the back of the speaker there is an on/off switch, charging port, and 3.5mm aux input jack.

Cambridge Audio claims about 8 hours of use time on a single charge, and this about what I experienced. The Oontz lasted through one full day of almost continuous playing at moderate volume before I started experiencing occasional dropouts and figured it was due for a charge. After charging, the dropouts stopped.

Both the Oontz and Oontz Angle have a rubberized matte finish, but the back of the regular Oontz speaker has a passive radiator for improved bass. I did notice the Oontz had a more robust sound quality than the Oontz Angle. Both Oontz speakers have two drivers beneath the grill. The Angle is a little longer, where the Oontz is stumpier, but fatter all around. Oontz Angle weighs in at 9 oz. and the Oontz is 10 oz.

Behind the front grill is an LED light for a variety of operating indicators. Like just about everything else these days, it displays obnoxious blue light while in use and when charging. This light can be a real nuisance at night where you are trying to sleep. For pairing, the light blinks alternating red and blue.

I have not tested the speakerphone capability on the standard Oontz model, but I attempted to use it once on the Oontz Angle and it was so poor that the other party complained about the sound quality and I had to switch to the iPhone’s built-in speaker. This is likely due to the mic placement on the back of the Oontz Angle. The mic is located on the top of the Oontz original speaker so I would expect it to sound a bit better. 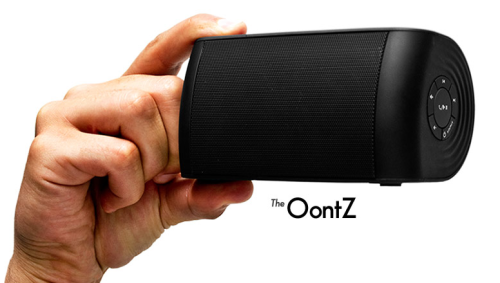 For its size and weight, the Oontz offers good sound and volume in a nice portable package. I really have no explanation for why I had such trouble with the Oontz Angle with my iPhone and iPad, but am pleased that it did not occur with the Oontz. All in all, I am happy with the Oontz speaker and would recommend it for this price range, though I’m sure you can get a better sounding speaker if you are willing to spend more.